How does a FREE Wedding Ceremony sound?

Written by Catherine Freudenstein on April 8, 2017. Posted in Wedding Celebrant

Attend the 2017 Wedding Fair at The Entertainment Grounds Gosford on Sunday 9th April for your chance to win a wedding ceremony from Ceremonies By Catherine!

*The entry that has the most likes will be announced the winner.

*Only one winner and one prize. Prize being a wedding ceremony contacted by Ceremonies By Catherine.

* Prize cannot be exchanged for cash

* Prize may not be gifted.

*Dates & times for the wedding ceremony will be subject to availability of Ceremonies By Catherine.

*Ceremonies By Catherine will only supply a round signing table if required. All other decorations etc for the wedding ceremony set up will need to be arranged by the prize winners. 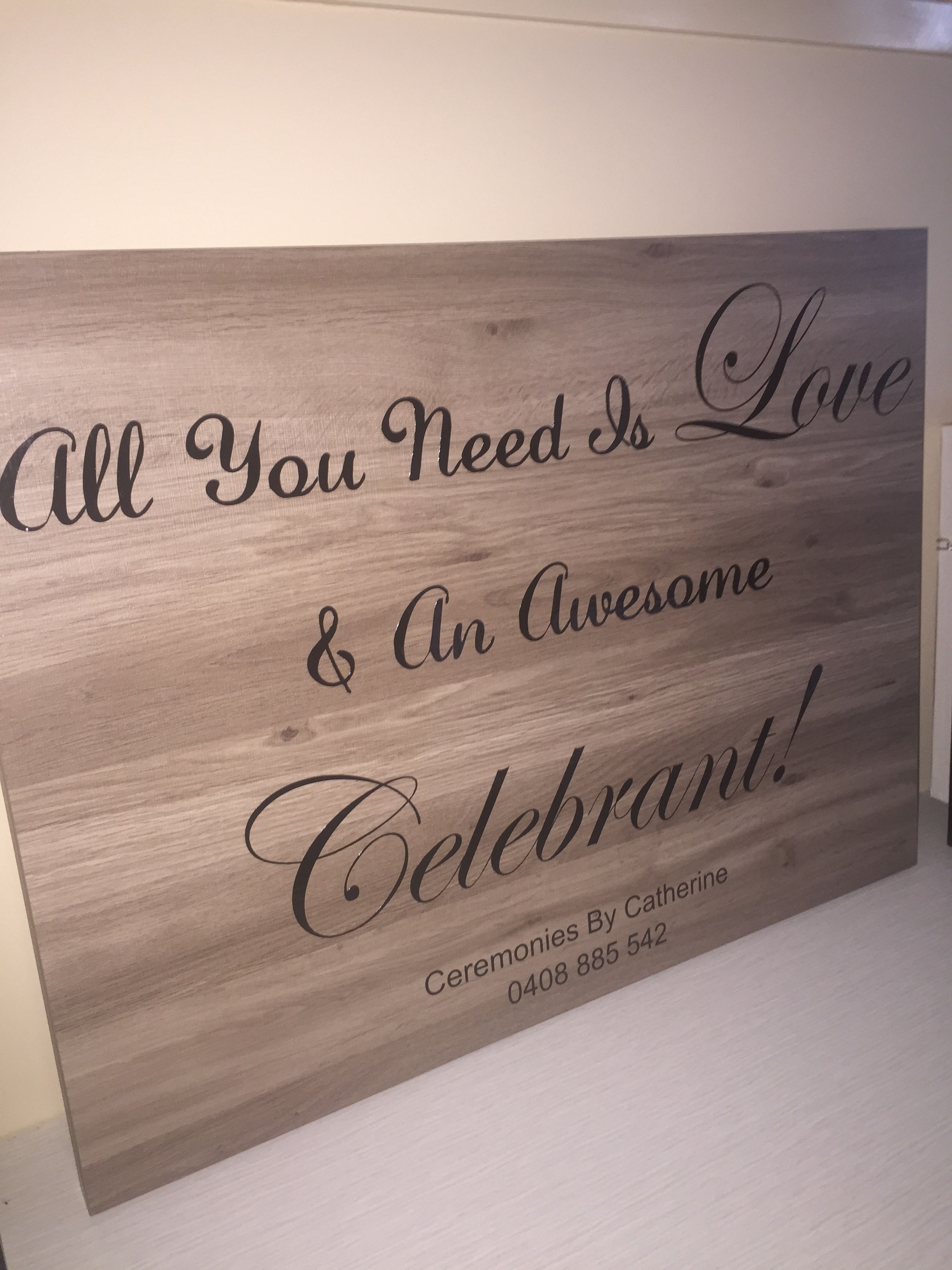 Elopement style ceremonies are becoming ever so popular at the moment. More and more couples, for many reasons want to have their special day where it is just them, witnesses, a photographer and their celebrant.

A big wedding isn’t for everyone, some people are just not into all the fuss (and sometimes drama!) and they simply want to just get married.

Don’t just go to the registry office to get married, having me as your celebrant will ensure a ceremony you will love. Your wedding ceremony can be wherever you want, not just at an office somewhere, courthouse or around your kitchen table… We could go to a breathtaking lookout, a park, or even at the end of a jetty at sunset!

Whatever the case may be my elopement style ceremonies are intimate and still very special. I treat them the same as any other wedding ceremony, just with less of an audience.

All you need is Love and an awesomeCelebrant!

If an elopement style ceremony is what you are after –I would love to hear from you.

Written by Catherine Freudenstein on January 18, 2016. Posted in Naming Day

A beautiful naming day ceremony for a beautiful baby boy Tyrael. It was a lovely, very meaningful ceremony that I was honoured to be a part of. Tyrael is so loved by all. He was such an angel for is special day – the poor little thing was so exhausted he even fell asleep during the ceremony!

Today we held a sand and stone ceremony. Sand ceremonies during a Naming Day are very popular, it is where hopes & wishes are expressed for the child future.

The stone ceremony was a great way to involve other family members, each stone handed out was held onto during the ceremony with the hope they will pass their love, thoughts and energy to it. It was then placed into a wish jar at the end of the ceremony as a keep sake for Tyrael. 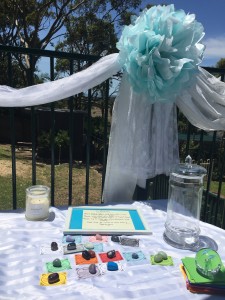 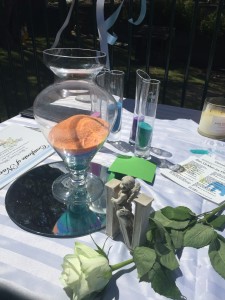 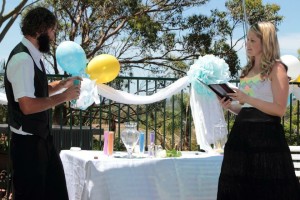 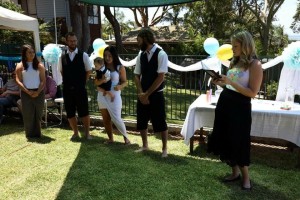 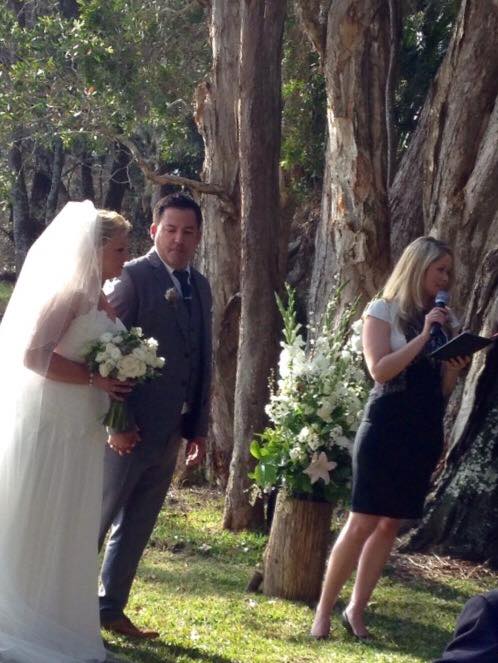 What a location!! Turtles Crossing at Green Point Forster NSW is truly amazing. Leah & Paul’s ceremony and reception was just so stunning, so perfect and so well planned. The ceremony was held by the lake amongst the trees and we even used a tree stump as the signing table! Which I loved and really tied in well with the theme and property. Thank you so much Leah & Paul for allowing me to be part of your special day. I loved it! 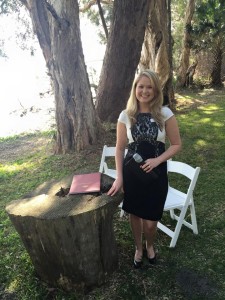 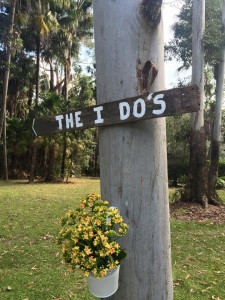 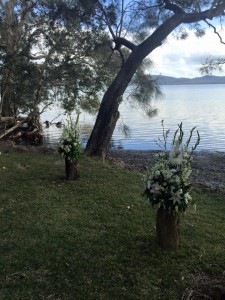 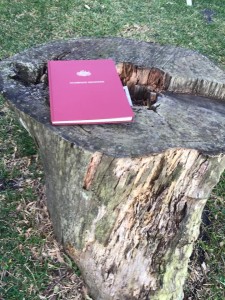 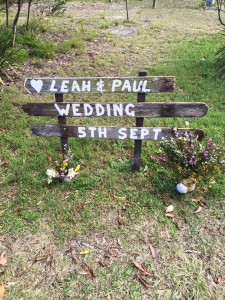 Gabi & Steve had a gorgeous beach ceremony at Caves Beach NSW. The ceremony was beautifully set up and the blue sky couldn’t have been more perfect. Reception followed at the lovely Caves Beachside Resort. Wishing you guys all the very best xx 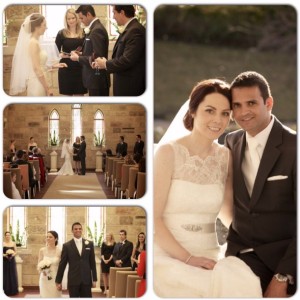 Hunter Valley Wedding are always perfect and this wedding ceremony was no exception. Held in the beautiful chapel at The Vintage Resort in the Hunter Valley. 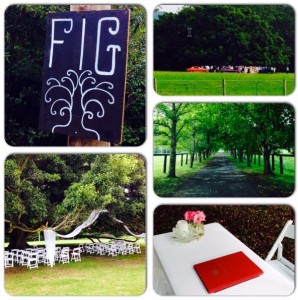 This was an absolute magical wedding ceremony held under a glorious fig tree at Wyong Creek. This is an amazing spot – it might even be my favourite wedding ceremony location on the Central Coast NSW!!

Beautifully decorated with white chairs for the guests, flowing drapery, sign on the side of the road so everyone knows where to turn and the bride even arrived in a horse draw carriage.

This fig tree is seriously stunning – I love it! 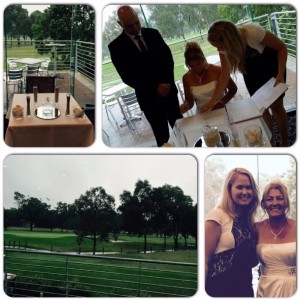 It was a very wet rainy day but that didn’t spoil this couples wedding day even with a last minute venue change. Unfortunately you cannot plan the weather but everything turned out beautiful. We incorporated a sand ceremony as part of their wedding ceremony representing two families coming together as one.

Written by kiwinterrigal on July 24, 2015. Posted in Naming Day

Naming Day & 1st birthday celebrations for Tyson! In keeping with tradition from their wedding day his parents decided to do a sand ceremony as part of Tyson’s naming day. This jar represents the love and support for Tyson. His parents, brother, and guardians chose a colour of sand to represent their wishes for his future. Such a fun naming day ceremony full of love. Wishing Tyson a very happy 1st birthday!

Written by kiwinterrigal on July 24, 2015. Posted in Wedding Celebrant

A lovely, intimate afternoon wedding at the end of Long Jetty NSW. It was their special day and it was exactly what they wanted. Simply perfect.